The Story of Rum and the High Seas

Posted on 22nd May

From its origins on the islands of the Eastern Caribbean to the rise and fall of the Navy’s ‘rum ration’, rum has long had a seafaring connection.

A spirit born on the seas

The association between rum and the sea began in the Caribbean, whose eastern islands were colonised in the 17th century for agricultural purposes. As Europeans developed a sweet tooth, demand for sugar rocketed and sugar-cane plantations spread across the Caribbean, with island governors calling in the support of the Royal Navy to protect their product from pirates and other racketeers.

The ever-resourceful sugar cane planters discovered that distilling the skimmings and molasses left at the end of the sugar-refining process made a raw white spirit called ‘kill devil’, but with the export of cane, spirits banned they ended up with more alcohol than they could trade in the local market. The solution was to sell this Caribbean rum to Royal Navy pursers, as spirits were much less likely to spoil aboard a ship than wine or beer.

By 1687, to guarantee a supply of rum for its sailors, the Royal Navy officially adopted a mixture of rum from the English Caribbean islands as part of the crew’s daily allotment, and rum became a staple on navy ships of nearly every nation.

The rise and fall of the ‘rum ration’

For more than 300 years Royal Navy sailors received their daily ration of rum, known as a ‘tot’, but over time this was gradually reduced, with the original allotment of a pint of rum a day slowly dwindling to only half a gill.

By the 20th century the powers that be decided that drinking even a tot of rum did not go well with the mental clarity needed to be a modern sailor. Last orders were called for the tot in the 1960s with the invention of the breathalyser, which showed that a sailor could be legally drunk after consuming his ration. In 1970, Admiral Peter Hill-Norton abolished the rum ration, with the last one dispensed on 31 July 1970 on what became known as Black Tot Day.

The tradition lives on

Nonetheless, the maritime community is never one to dismiss its traditions, so it is no surprise to find that rum is still given to sailors on rare special occasions – such as the Queen’s Diamond Jubilee in 2012 – and many amateur sailors raise a glass at sunset and toast their seafaring forebears.

Here at Lyme Bay Winery, we are also keen on celebrating the threads of history that bind our stories together, and our Lugger spiced rum has its own links to Dorset’s maritime heritage.

The name of our Lugger Rum originates from the fishing boats that notorious local smuggler Jack Rattenbury used to smuggle contraband into Lyme Bay in the 18th Century. Fast, agile and often painted black, under the cover of darkness these Luggers were almost impossible to catch.

Unlike most commercial spiced rums, our Lugger Rum is not defined by an overpowering vanilla characteristic. Instead, our aim was to create a rum that offers a full profile of spices. As a result, we’ve aged Caribbean rum in bourbon-charred oak barrels right here in Devon before spicing it with nutmeg, orange peel, cloves and vanilla to create a superlative spiced rum, perfect for raising a tot to salute the setting sun and sailors around the globe.

We would love to hear from you. Telephone, email, social media – get in touch. We want to know what you think and what we can do to improve. Go on. Or just say hi!

There’s a new spirit in town – sales of rum are on the rise. Though gin isn’t going anywhere, Brits are clearly interested in exploring rum a bit more. White... 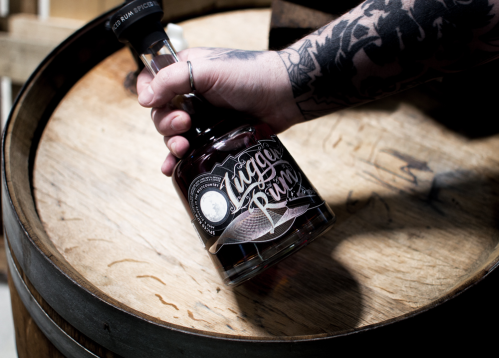 While not everybody is a football fan, we’ve yet to meet someone who doesn’t like a cocktail. With that in mind, we put our thinking caps on to come up...

With its ancient heritage, the word ‘ mead ’ used to conjure up images of carousing Vikings or drunken medieval revellers, but recent recipe innovations have contributed to the resurgence...

Please, fill in the fields to submit the form.
Sorry, your specified age is less than the required.